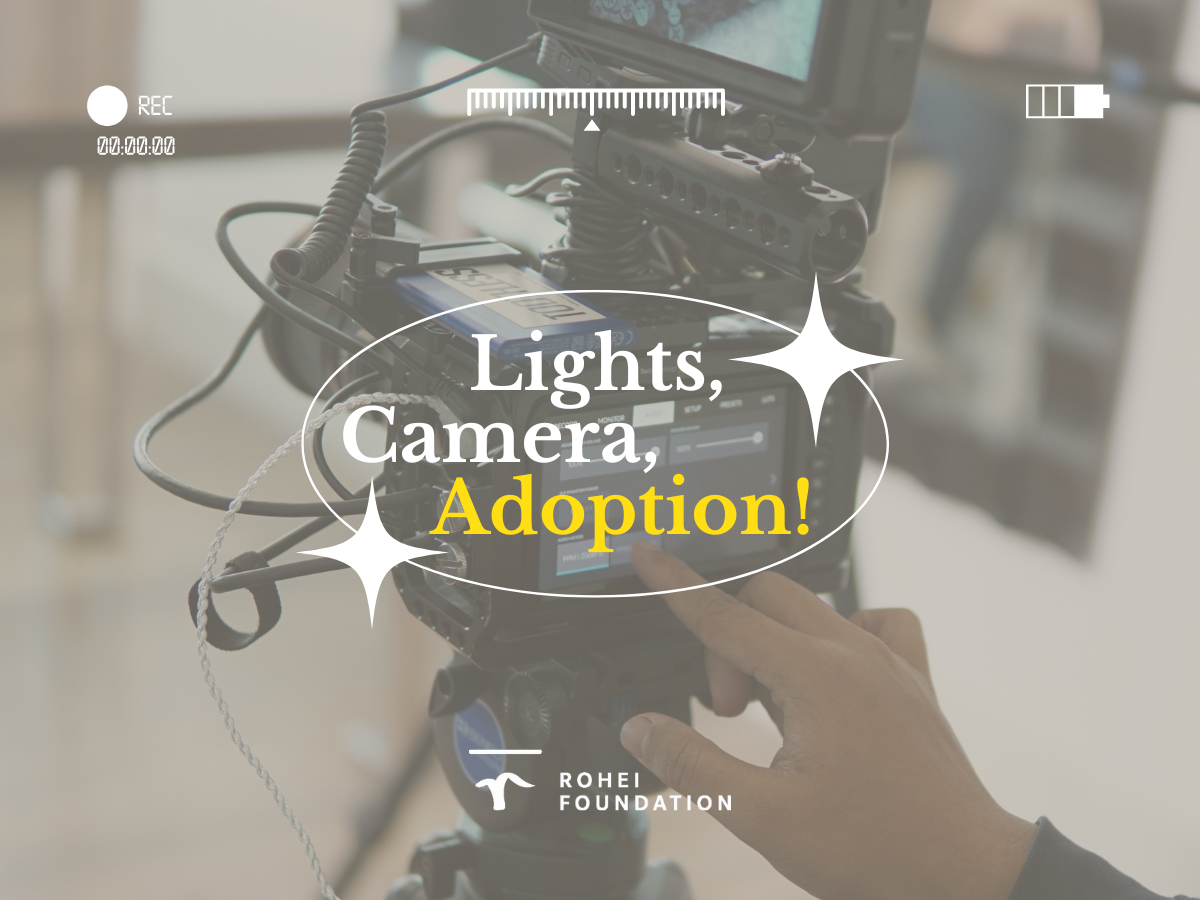 Media has always been a tool for amplifying stories. Given this, it can also be used as an instrument to establish stereotypes that can ultimately affect how people view and associate narratives in real life. Adoption, for example, is one of the stories that can be misrepresented in the media. As a result, there have been stigma and misconceptions surrounding adoption.

In the Philippines, society dominantly views adoption in a negative light. This is because of the stigma that orphaned children are inferior to a child biologically related to their parents. This results in the normalized depiction of discrimination against adopted children where they are typically ridiculed or bullied. This belief is further supported by Philippine media.

Now, one of the ways to stop the spread of this negative belief is to tackle the representation of adoptees in the media. This could be easier said than done as many media practitioners use adoptees in their stories to incite strong emotions and these emotions are usually on the bad side such as anger, frustration, and alienation.

In the Spotlight: Orphan and Meet the Robinsons

Films have the power to influence audiences to think a certain way about adoption through how they represent orphaned children in the films. Here are two examples of films that have depicted adoption in a negative and positive way.

This is a movie that uses strong negative emotions to establish a particular message about adoption. The film starts when the couple Kate and John Coleman adopt a little girl Esther from a children’s home due. Esther is warmly welcomed into their family and even tries to bond with her adoptive siblings. Soon, Esther begins to show her true colors.

Some of the disturbing scenes that Esther did in the film include physically hurting herself but blaming others for it and burning down the family home. The movie ends with Kate Coleman learning about Esther’s true origins and realizing that she wasn’t a child after all, but a 33-year-old serial killer diagnosed with Hypopituitarism – a hormonal disorder that causes proportional dwarfism.

The movie banked on the aspect that parents may be unaware of their adoptive child’s full background and that they only rely on the information given by social workers. This then causes the fear of bringing a potential danger into the families and increases the stigma that orphaned children are potentially dangerous.

Moreover, the film drew flak as it depicts adoption in a violent light. The Congressional Coalition on Adoption Institute said that the film skews public opinion against children awaiting adoption not only in the United States but also worldwide. To add, Jeffrey T. Haag of the Florida Baptist Children’s Homes said, “My concern is that adoptive children or children waiting to be adopted will face cruel jokes and ridicule from other children as a result of just seeing the previews. I shudder to think that families considering adoption will be negatively influenced by unfounded fears”.

Though horror movies like Orphan (2009) have indeed caused damage to the stereotypes of adoptive children, we can still look to other movies and characters that represent adoptees in a more progressive and encouraging way.

The beloved Disney film Meet the Robinsons (2007) tells the story of 12 year-old inventor Lewis who longs for a family of his own. After going through so many adoption interviews and parents being unwilling to take him in, he finally expresses how frustrated he is with feeling unwanted by everyone, including his own birth mother. After a science-fair-project-gone-wrong, he is taken on a whirlwind time travel adventure which sends him into the future. There he meets the Robinsons – a big, quirky, fun-loving family with members having their own unique individualities and interests.  After spending some time with them, Lewis feels a genuine connection as they accept him for simply being himself.

The family motto, “Keep Moving Forward” allows Lewis to realize that he could still feel empowered to live life to the full despite his past – be it his past mistakes as an inventor or his past of being orphaned.

Unlike the previously mentioned film, Meet the Robinsons uses a more hopeful and inspiring tone. The uplifting message of letting go of your past and focusing on what the future holds can help us create better mindsets both in life and in thinking about how we can approach matters surrounding adoption.

Ultimately, how adoption is portrayed can impact adoptees and their own perceptions of what it means to be adopted. Media and culture play a role in how adoptees discover and deal with their truths. Thus, negative portrayals of adoption in the media may make it harder for adoptees to embrace and tell their stories.

Portrayals of adoption, especially in Filipino media, plays a major role in creating local culture. We had the privilege of hearing from two Filipino adoptees, Carmel and Hanna, to learn how the people’s view on adoption as shown in the media affected their way of dealing with their truths.

Take for example, the way some local teleseryes create scenes of orphaned, abandoned, and neglected children. For Carmel, an adoptee who is now in college, her initial understanding of how she was adopted was somewhat influenced by these dramatic scenes such as being left at a doorstep as a baby. Though she grew older and learned that these sorts of scenes were not always true,  they still made an impact on her curiosities as a child.

Despite such misconceptions about adoption processes, Carmel’s life as an adoptee was still a positive one as she was raised in a loving and peaceful household. She believes that adoption is indeed a beautiful thing and that individuals get to define what family means to them.

Similarly, Hanna’s process of learning about being an adoptee came along with dealing with other people’s perception of adoption. When Hanna’s teachers learned she was adopted, they asked her if she had a rebellious phase because that is what they usually see on TV. This also made it hard for Hanna to share her story openly to her friends because she was afraid of being judged due to the stigma surrounding adoption, but Hannah’s faith encouraged her to look beyond what people say. This, coupled with the unconditional love showered to her by her family, replaced bouts of doubt with gratitude and love. Now, having fully embraced her truth, Hanna aims to amplify her story and break the stigma to show that adoption is a beautiful thing for her.

Hanna commits to sharing her story more to empower adoptees who struggle with telling their stories due to the fear of being judged. She believes that a major reason behind the fear of adopted children opening up has something to do with the stereotypes normalized in the media, especially in the Philippines.

Bahay Kubo: A Pinoy Mano Po sees adopted children as blessings. Eden, portrayed by Maricel Soriano, showers all her children with the same love and affection. In a way, the film normalizes adoption as it depicts how a family collectively deals with both the good and the bad, and how a family overcomes.

May Bukas Pa is one of the most notable Filipino TV shows that does not follow the typical Filipino teleserye formula. Who can ever forget Santino and his Bro? May Bukas Pa follows the story of Santino, an abandoned child raised by priests, and his journey of meeting Jesus, or Bro, and being an instrument of faith, hope, and goodwill!

Despite following a formulaic plot, the remake of Pangako Sa’yo was able to depict adopted children in a positive light! Yna Macaspac, played by Kathryn Bernardo, was abandoned due to a landslide that led her biological mother to believe that she was one of the casualties. Yna was later on raised by a family that provided for her needs and supported her in her passion for cooking.

Marry Me, Marry you is a story about friendship and family. Camille, portrayed by Janine Guttierez,  had a mother who was terminally ill. Before passing away, her mother entrusted Camille to her three best friends. Growing up, Camille was never in lack of familial support as she was raised by three loving mothers and their families

Despite the stigma surrounding adoption in the Philippines, there are Filipino media practitioners who are willing to amplify beautiful stories the adoption. Through and through, media is an integral tool in creating culture. Given this, it should be a tool in creating a culture of love and acceptance.

Now more than ever, media practitioners should not only be mindful of the content they produce, but also rigorous in challenging the status quo set by existing media. Through the #LightsCameraAdoption campaign, we see how films and television shows impact how people view adoption; and this includes how adoptees view themselves.

#LightsCameraAdoption is a social media campaign that focuses on media portrayals of adoption. The campaign analyzes how adoption is represented through the lens of film and television and how these affect the stories of adopted children. Check out ROHEI Foundation’s Facebook and Instagram pages to know more!

Paolo Malagotnot and Nickross Raagas are both fourth Year Legal Management majors while Feliz Munarriz is a fourth year European Studies major. They are all undergraduate students from the Ateneo de Manila University and are interns at ROHEI Foundation.

At its worst, the media creates caricatures of adoptive stories in poorly written dramas and advertisements.  That’s why media practitioners AC Nicholls, Rod Nepomuceno, and BJ Lingan remain optimistic that advocates can reclaim adoption narratives by vocalizing resistance against false myths.  For this year’s Adoption and Alternative Child Care Week Celebration with the National Authority […]

I’ve been asking all the wrong questions about preparing to be a parent. I moved to the province last February, as it is more financially reasonable to be an “expectant” single adoptive mother in the province. House rent and utilities are considerably cheaper, and so are meat and vegetables. Schools as well. While looking for […]

Comedy is serious business! Laughter can help us see the brighter side of life when things get rough. So then, what happens when humor — something that relieves stress and brings people together — is used to discriminate against those who may already be bullied by society? Let’s face it: Adoption is shamed in the […]

In the Philippines, girls are more likely to be ad

Here’s a recap of our booth at Victory Fort Boni

Did you know OFWs can start their adoption journey

This is Family is the Answer: An Adoption and Fost

“You never outgrow the need for a family.” - L