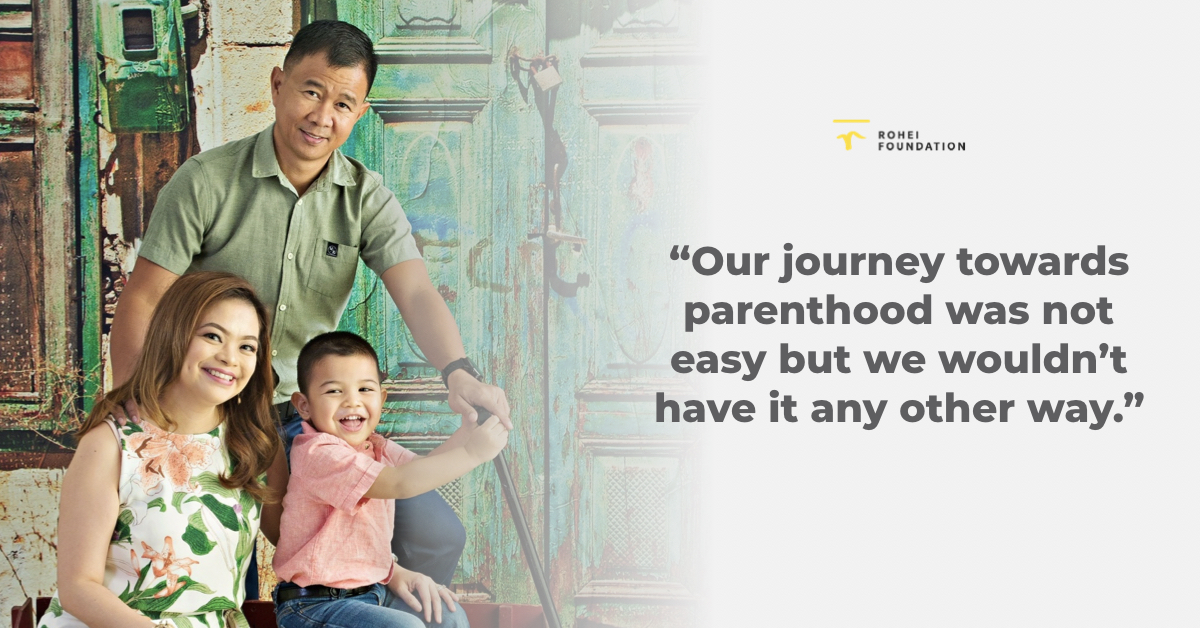 Every couple’s journey to parenthood is different. For Zen and Karlo, the journey took 15 years, failed attempts at in-vitro fertilization, a direct adoption that did not materialize, and the heartbreaking loss of a child. Despite these circumstances that could have discouraged them to be parents, this couple remained patient and persevering. Through prayers and God’s perfect timing, they are now mom and dad to a bright, healthy, and handsome boy named Marko. Read on for their story.

“If not for patience and perseverance, I wouldn’t be where I am or where I want to be.” This was the quote my husband, Karlo, chose for his yearbook. We got married in 2002. When I first read his yearbook quote, I thought that they were a good choice of words and wondered where he got them. Little did I know that he really lived by it.

I have never been a patient person. I believe I am goal-oriented but definitely not patient. I felt lucky at the beginning of our marriage because the timing was perfect. During our blissful first year of marriage, I decided to stop working to focus on building our family. Although we didn’t get pregnant that year, it was okay because we spent it enjoying each other’s company—an opportunity we will no longer have once children come. Years went by and we still did not have a baby. We diligently went through the usual rounds of fertility work-ups, diagnostic tests and took the recommended medication. My husband remained patient but I started to worry. To take my mind off the pressure of getting pregnant, I decided to review for my nursing licensure exams to be able to work in the United States. At the same time, my husband achieved his dream of becoming a commercial airline pilot.

In 2006, I became a nurse in the United States. We were at a crossroad because both our careers were taking flight but in opposite directions. We decided to pursue our individual goals and had to live apart, only seeing each other every six months. We persevered and saved up enough money to undergo in-vitro fertilization in 2009. In a span of weeks and with almost a million pesos down the drain, our excitement and anticipation turned into devastation when we were unable to fall pregnant. The experience left us traumatized. I told myself that I was never going to go through any form of fertility workup again. Maybe having a baby was not our destiny. I went back to the US to work and stayed until 2012, when I decided to return to the Philippines permanently.

Through the years, the dream of becoming parents was never forgotten. We decided to try for a child again without any medical intervention. Unlike before, I worked full time and found a job managing nurses in a BPO company. We figured not to put too much weight on having a baby and were content on being blessed with a loving relationship.

Our First Attempt at Adoption

In 2015, a couple close to us offered a baby, telling us that they will conceive for us and give us the child wholeheartedly. After the initial disbelief over this selfless gesture, we embraced and looked forward to their promise with the plan to legally adopt the child after birth. A baby girl was born in the summer of 2015 and we were overjoyed to finally have a baby. After 13 years of marriage, I finally felt like a mother. We were able to bring her home from the hospital and barely slept during our first night, watching her sleep just like other first-time parents.

However, this excitement was short-lived because the very next day, the biological parents decided to fetch her. They explained that they were too sad without their baby and will just return her to us when things get better. We decided to give her back. It didn’t feel right to be happy at the expense of other people. Heartbreaking as it was, we knew we had to accept it.

READ: Is Adoption Right For You?

A couple of months later, after praying for a baby, I missed my monthly period. I was already 39 years old at the time and never missed a single period in my life. I thought I was having early menopause. I decided to buy a pregnancy kit to check and seeing two positive lines almost left me in shock. We were finally pregnant, without the help of any fertility treatment and while I was working full-time in a BPO company. Our miracle finally arrived.

The pregnancy was high-risk. I had to be on bed rest for most of my pregnancy because I was prone to bleeding and I was diagnosed with placenta previa towards my 3rd trimester. On my 29th week, I woke up with a lot of bleeding. We rushed to the hospital and the doctor did all that she could to prevent me from giving birth prematurely. After a week, I was still bleeding and the baby’s heart rate was starting to get erratic. I underwent an emergency C-section and gave birth to a healthy baby boy in April 2016, albeit prematurely at 30 weeks. We were over the moon. God finally gave us our baby. He had to stay in the incubator at the NICU while I was discharged. On the ninth day, we were called by the hospital. We were worried but had full trust in God as our son was His perfect miracle and will surely be protected. We were in shock when we went inside the NICU as our baby was bleeding and his heart rate was decreasing. As a nurse, I immediately knew what was happening but I was unable to understand and accept it. It was a nightmare. We had to make the painful decision to stop his resuscitation as efforts were proving futile. The first time I was able to finally hold my son was when he was already lifeless. I could not even see his face as his skin had already discolored from too much bleeding. I offered my baby to God in that instant as he belonged in heaven now.

The days, weeks, and months after that went painfully slow. Our spirit was broken. I had to physically recover from my C-section yet I couldn’t feel any pain aside from the excruciating agony in my heart. We lived one day at a time, holding on to God despite being unable to fathom why He allowed us to be with our son for only a few days. We hoped that we will someday understand why this happened. December of that year felt like the world was mocking us. Everyone was happy because of the Christmas season but we felt sad as we had no baby to love. At church, we were reminded of Zechariah and Elizabeth’s story and I instantly felt hope in my heart. I told God that I will hold on to His promise — maybe we can still be parents after all. After two months, I woke up feeling light and happy for the first time after many months of painful sadness. I felt like God was telling me to go ahead and try adoption. I was always hesitant when it came to adoption, unlike my husband who has always been open to it. We decided to wait for the first death anniversary of our son and submit our requirements to an NGO, the Kaisahang Buhay Foundation (KBF).

READ: How To Adopt In The Philippines We surrendered everything to God as we embarked on our adoption journey. We did not even choose a gender. We were strong in our conviction that the process will be smooth and easy if it was for us. True enough, seven months after we submitted our application to KBF, we received a text that would change our lives forever. We had a match. Before going to the agency, we prayed for divine intervention to help us open our hearts to our new baby. As soon as we arrived in KBF, we were shown the file of a 15-month-old baby boy. It was a bonus that he was handsome. Then and there, I felt reassured that this was truly our son. The succeeding pages did not matter.

The next day, we visited him in the orphanage. After 15 years of marriage and multiple setbacks and heartbreaks, we were now face to face with our little boy. He was extremely cute and his photos didn’t do him justice at all. We felt as if we hit the jackpot as he was sweet, friendly, healthy and adorable. He instantly captured our hearts. It has been almost three years. Marko is a wonderful revelation. He has a bubbly and sunny personality and his favorite color is yellow. He is inquisitive, confident, and assertive. It always melts our hearts whenever he asks us for a family hug and proudly beams that his best friends are Mama and Papa. Having this boy is a dream come true.

Our journey towards parenthood was not easy but we wouldn’t have it any other way. We accept the good, the bad, the joy and the pain because God’s plan is perfect and His way is better than what we imagined for ourselves. Today we can say that while patience and perseverance led us to our son, prayer was the key ingredient that really sealed the deal. Carissa Moran reflects on fake news and common adoption myths and her personal experience.   “They’re probably rebelling because they are adopted.” “You should go look for your biological family.” “Just find shortcuts for the legal papers.” “You’re just adopted!”   These phrases are considered commonplace when talking about adoption, whether in movies, teleseryes, or […]

[Trigger warning: This post contains sensitive themes of abandonment and death.]   Why would a mother, or any adult, anonymously give up a baby? Why would they choose to abandon the baby in secret, where no one could see them? Why would they make sure nobody knows who they are, or what they did? On […]